The Bauhaus was an Art School in Germany, and the school was founded in 1919 by Walter Groupis (1969) in Weimar in Goethe. In 1924 the school moved to Dessau, and later moved to Berlin in 1932-1933, but the school had to shut down because of the pressure from the Nazi political party. The Bauhaus School has played a big role in history in art, design, and architecture. Bauhaus has played a huge role by contributing to modern design, by developing the well-known typography font sans-serif.

The school focused on functionality, simple forms, and rationality, the idea behind the school was to create a school that had all the elements, where architecture, painting, sculpture, craft engineering, where everything was in harmony and the artistic spirit and individuality could live together with mass production. The Bauhaus school has later become one of the most influential in modern design. Today the world sees the Bauhaus to be the home of the avant-garde of classical and modern style, in every field of liberal and applied arts. Bauhaus had many great contributors, artist and teachers like Laszlo Moholy-Nagyand and Herbert Bayer, they both where important in the development of graphic design and were great contributors.

The Bauhaus School continued on with Laszlo Moholy-Nagy, after he resigned in 1928 at Bauhaus, he then moved to Chicago in 1937 and started the new Bauhaus School called; The Illinois Institute of Technology. This new school had the same philosophy as the original Bauhas School.

“The Style” in Dutch language. De Stijl was a movement in 1917 that wanted harmony and order; it thrived for the ultimate simplicity and abstraction in the way it could be expressed. The style was to remove elements, or reduce them, and just using primary colors with geometric forms. The two most important artist connected to this movement was Theo van Doesburg, Piet Mondrian, and Gerrit Reitveld. There were also a journal called De Stijl, and this journal was published by Van Doesburg, and in this journal he discussed the group’s theories. They wanted to reduce color and form, where important and a great influence on the development of graphic design.

They used only primary colors like blue, yellow and red, and with black and white. Their compositions where simplified down to vertical and horizontal directions. De Stijl influenced the style of Bauhaus, architecture, fashion and interior design. Actually Theo van Doesburg applied to the Bauhaus School, but was not accepted, so he started his own school right next to the Bauhaus school.

Swiss design is a movement that started in Switzerland in the 1940s and 1950s, and was much developed from the graphic design style movements during the 1920s. The Swiss Design is often referred to as the International Typographic Style, or the International Style. Two schools; The Zurich School of Arts and Crafts was led by Josef Müller-Brockmann, and the Basel School of Design where led by Armin Hofmann. They focused on simplicity, legibility and objectivity. One of many contributions from these two schools where the use of the sans-serif typography, asymmetrical layouts, grids, and how they combined photography and typography in visual communication. One of the most influential works was posters; they saw the poster as the most influential mean of communication.

Examples from these movements and current design

The Bauhaus from its period 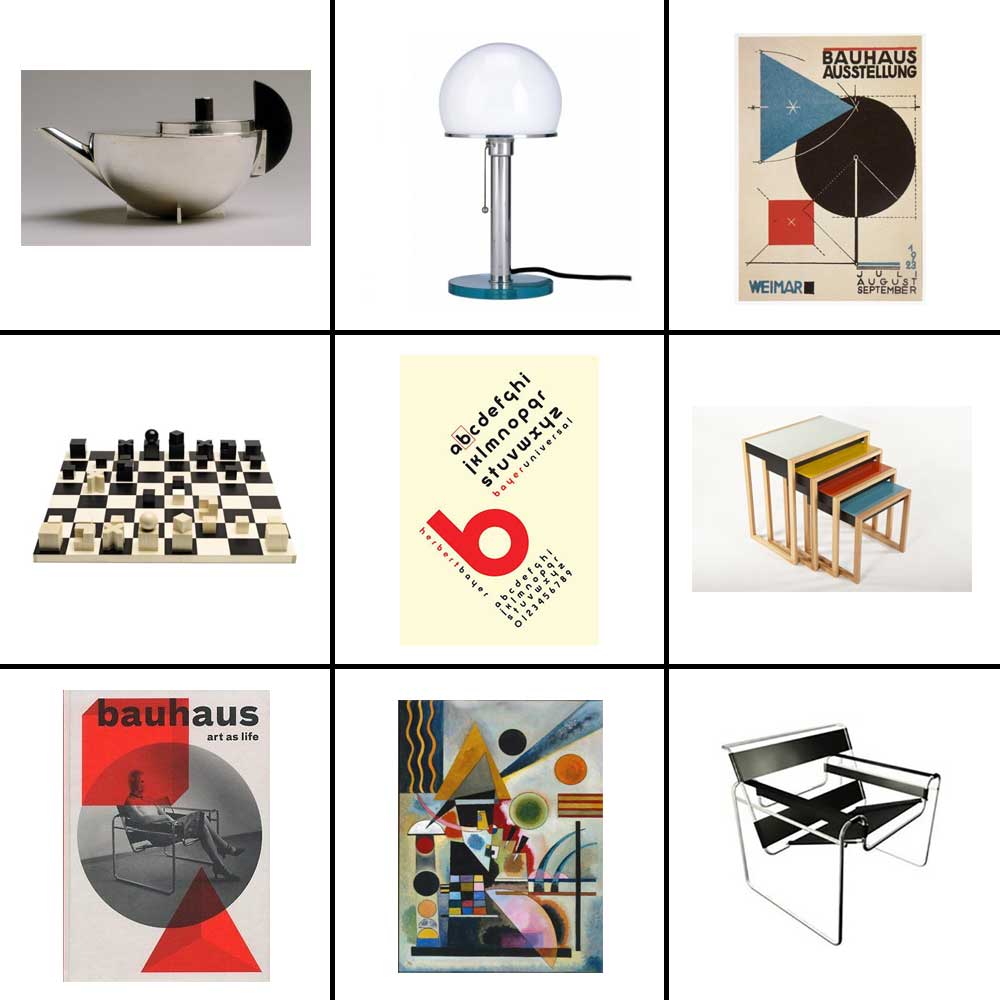 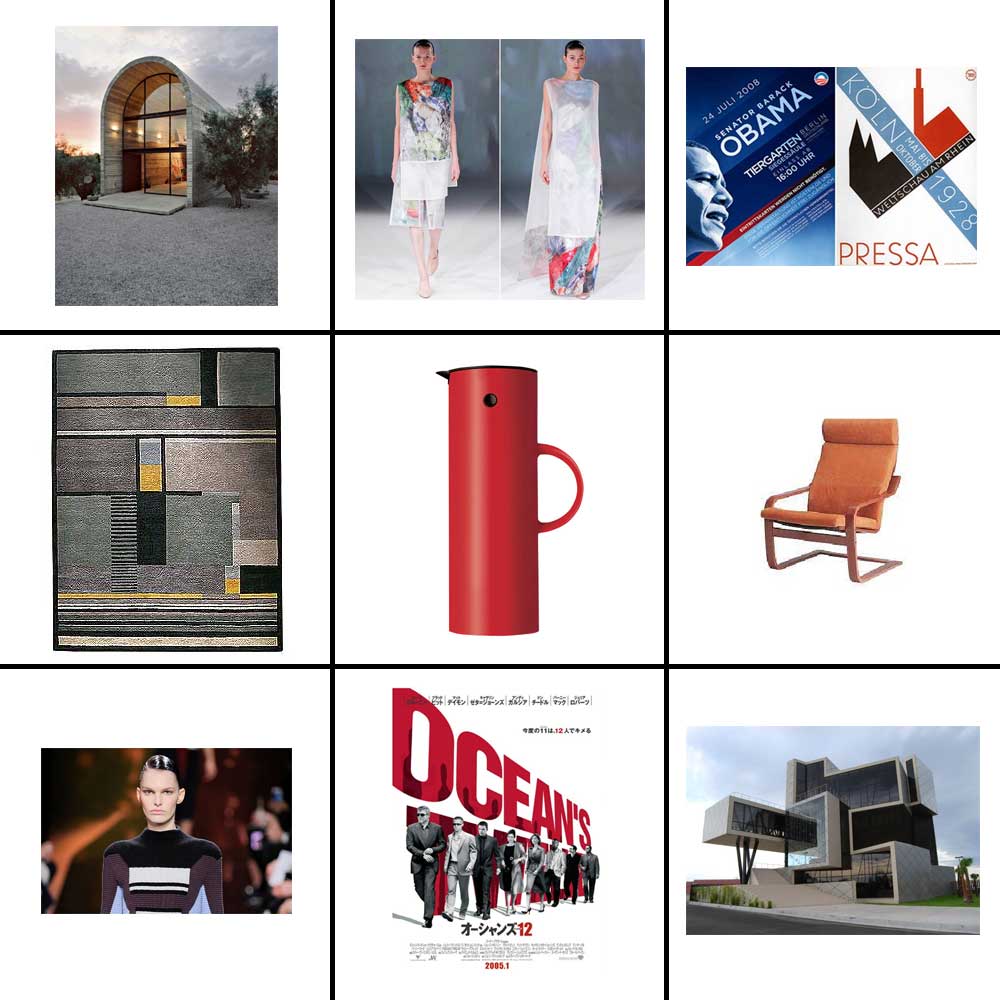 Modern Architecture is inspired by the Bauhaus movement. You can see this by the simple forms and functionality, that we today call “Funkishus” here in Norway. The orange chair from Ikea is clearly inspired by The Bauhaus period. Bauhaus wanted to serve the need of the people, and Ikea functions in the same way today. You can see the simple and clean lines in the Ikea chair, it has the same lines as the original Bauhaus chair, the chair is minimalistic, where function and usability is combined, and its timelessness. The Bauhaus movement has also had an influence on how the web is today. Art, technology and craft where combined in the Bauhaus movement, where the idea was to bring it all together, where arts, architecture, everything was brought together. And so does the web, the web, Microsoft for example, focuses on functionality, usability, taking away unnecessary clutter. Making the web visual attractive, but first and most important, the web needs to be practical. You see the same in the company Apple and their products.

De Stijl from its period 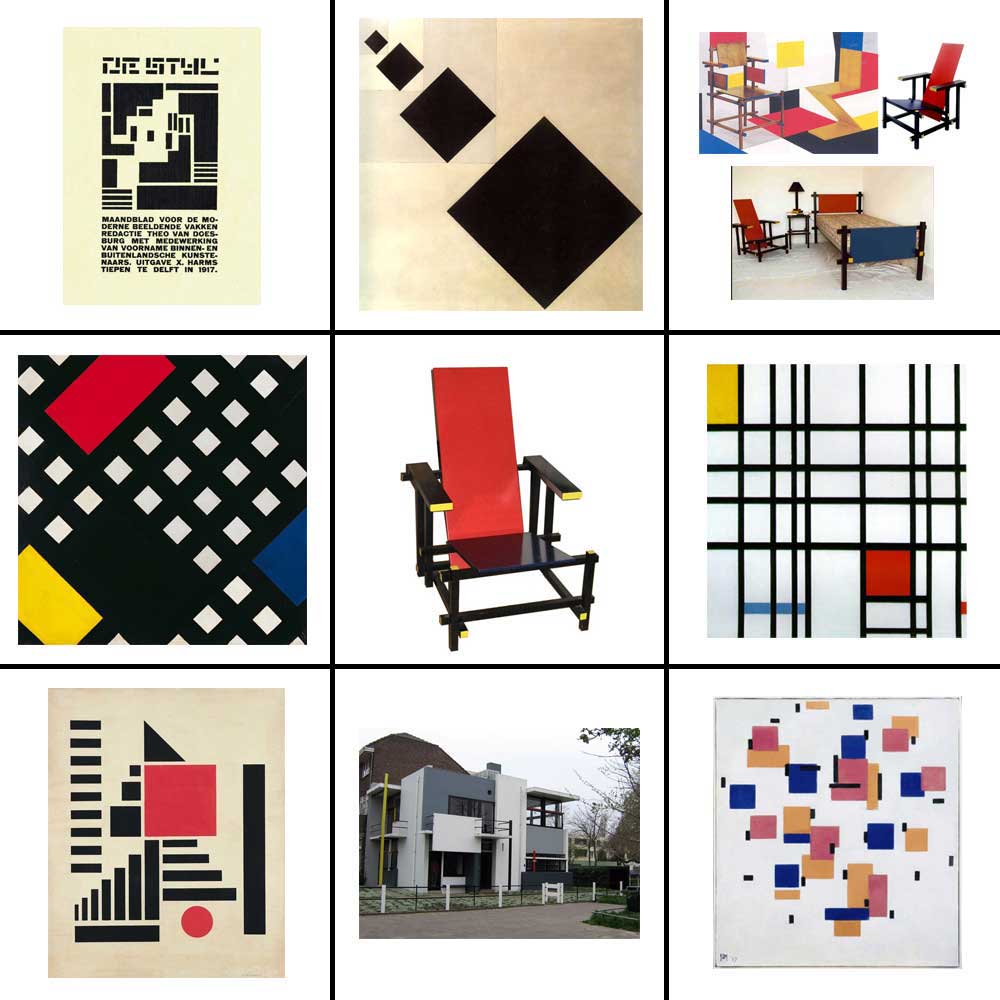 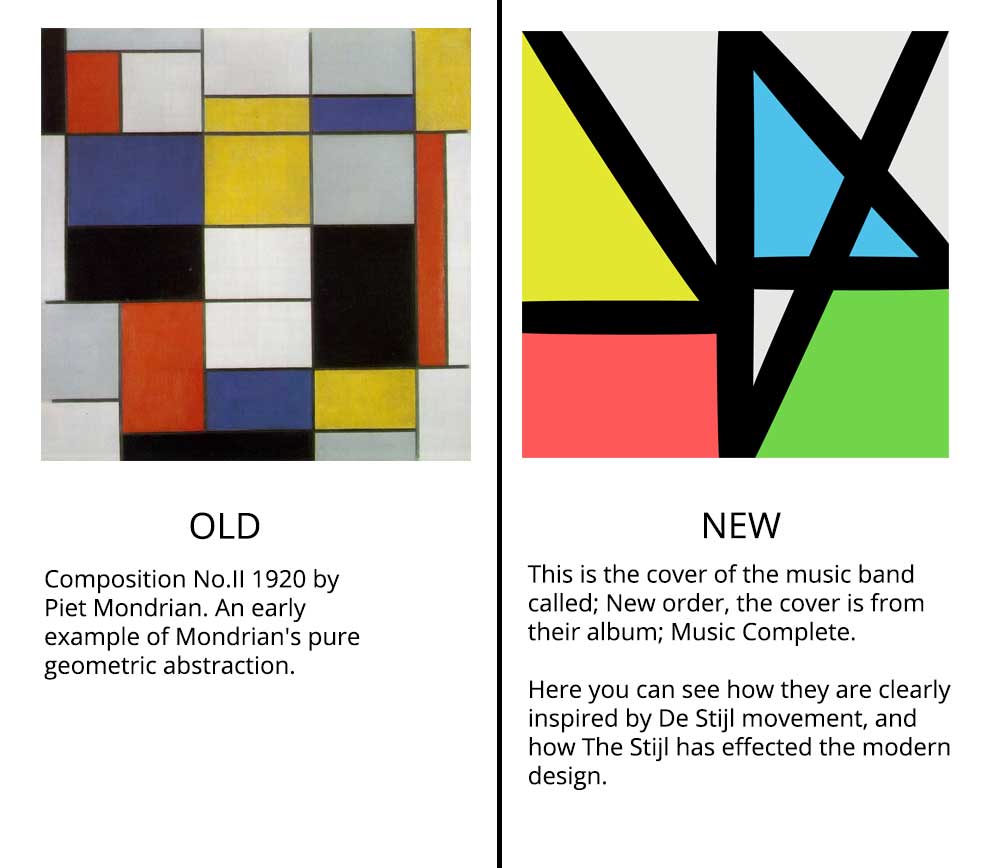 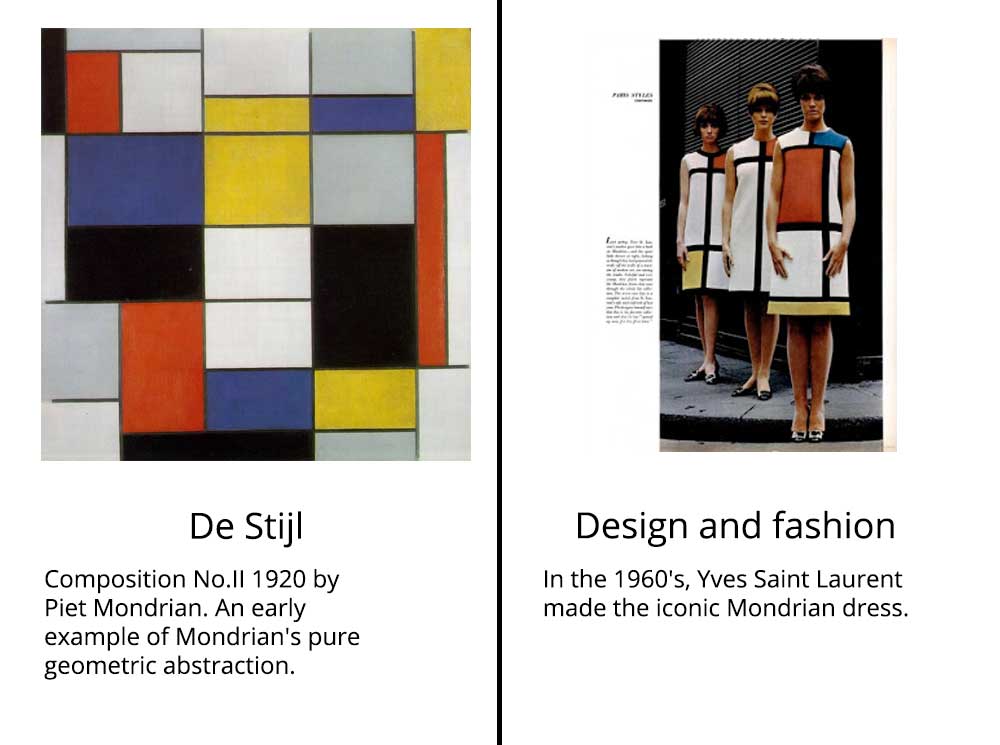 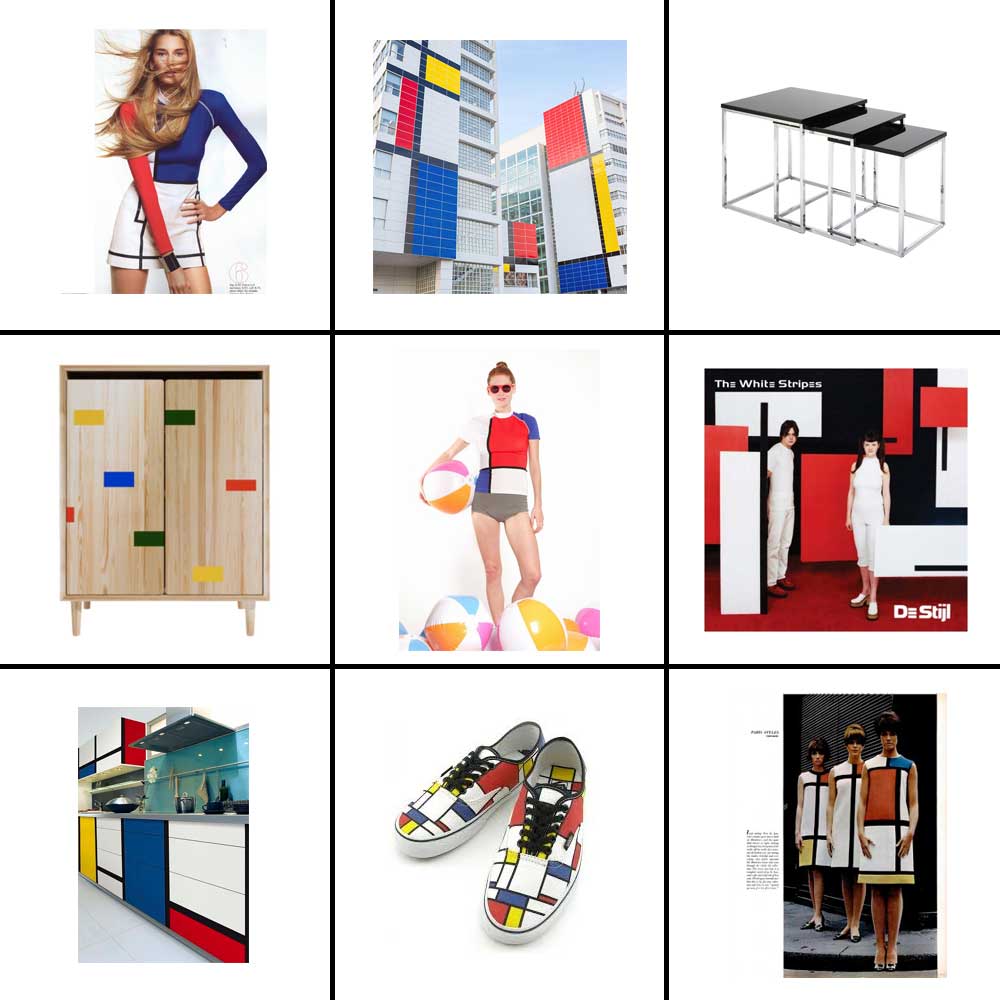 You can clearly see how the modern design has been influenced by De Stijl. The band called White Stripes made an album called De Stijl, and you can see how they have used the color red combined with the black and white. There are horizontal and vertical lines. The same goes for the fashion and interior industri, they have used primary colors and have horizontal and vertical lines. The style is minimalistic and clean with strong lines and primary colors.

Swiss Design from its period 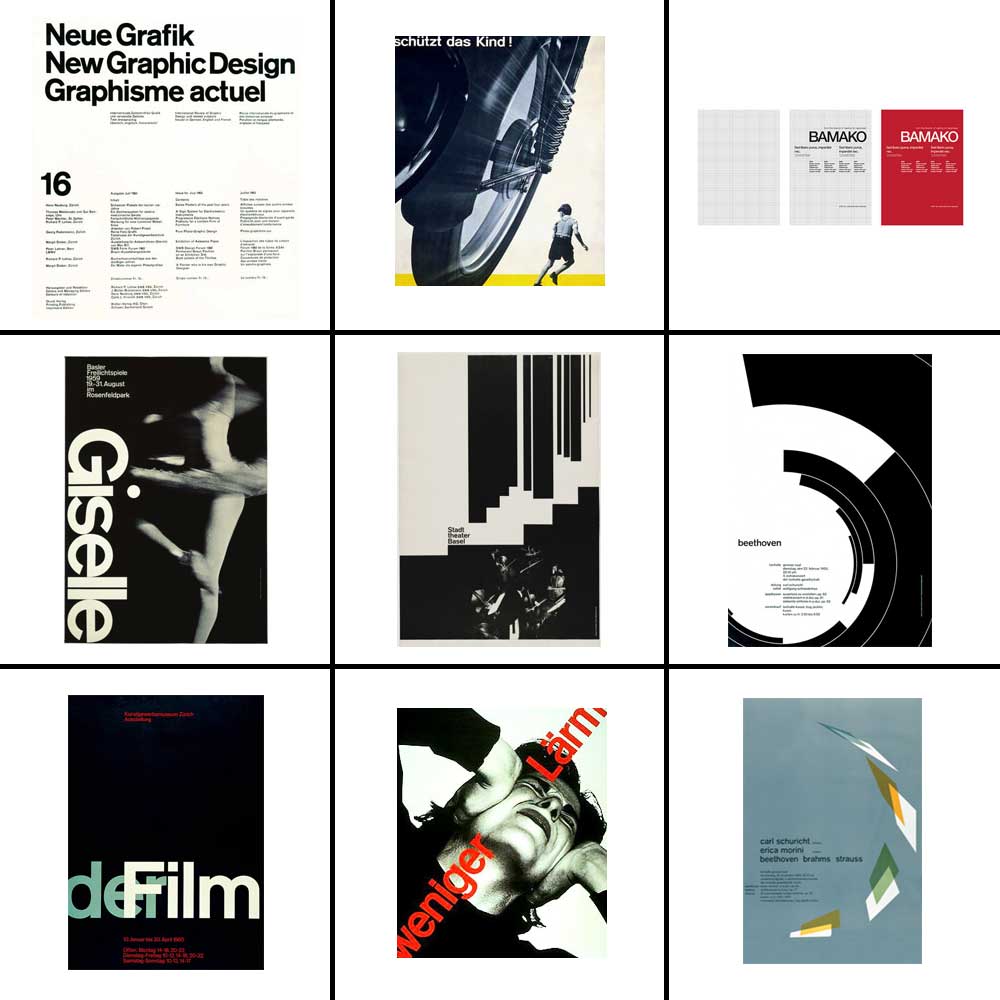 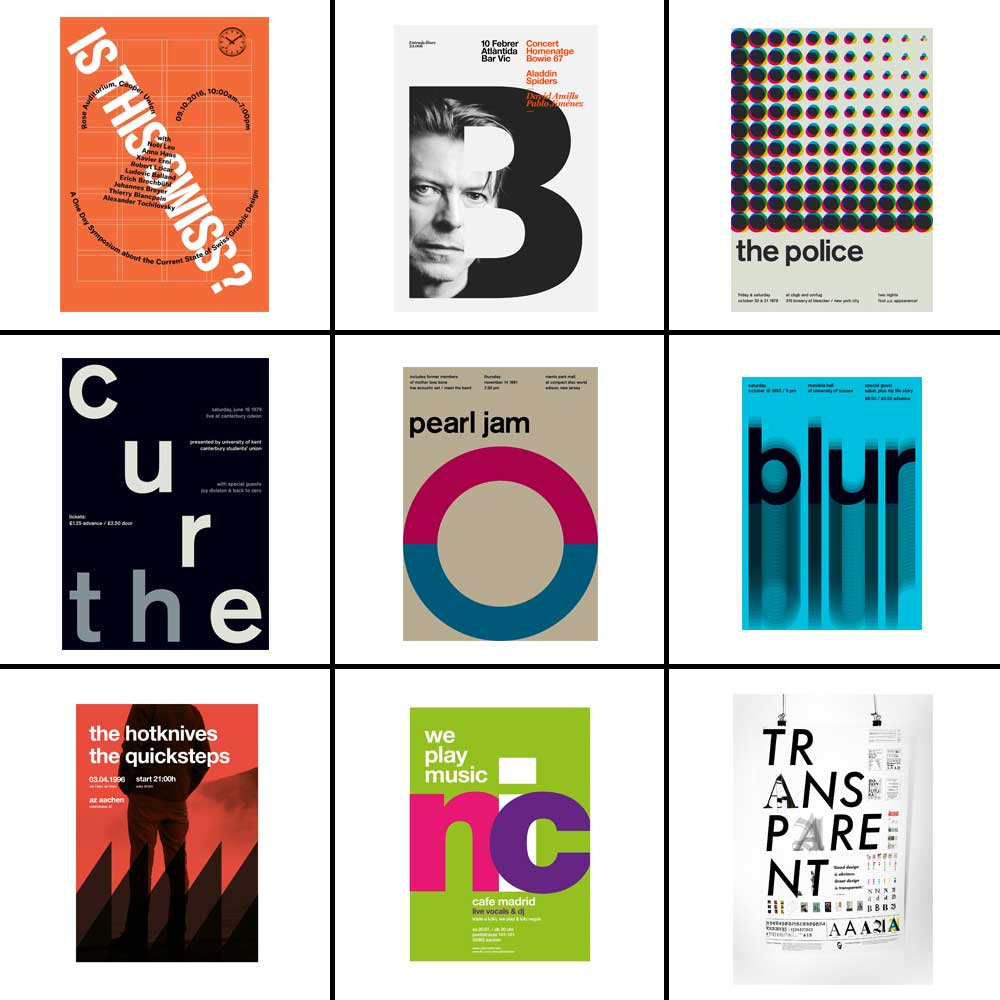 There is a geometric grid in the new posters, clearly influenced by Swiss Design. You see how the typography is striking; it is bold and with a lot of contrast, and it is clean and minimalistic. The message is clear in these posters from newer days, there is a visual impact. Grids, sans-serif and photos play a huge part in the Swiss Design, and you see how the Swiss Design has influenced the graphic design today. There is an asymmetrical balance between the negative and positive elements in the design.

Look at the history timeline at the beginning of this lesson. Gather information from 1900 – 2000, and design your own timeline using the Swiss Design Style as your theme. Each movement should be described in a creative way. 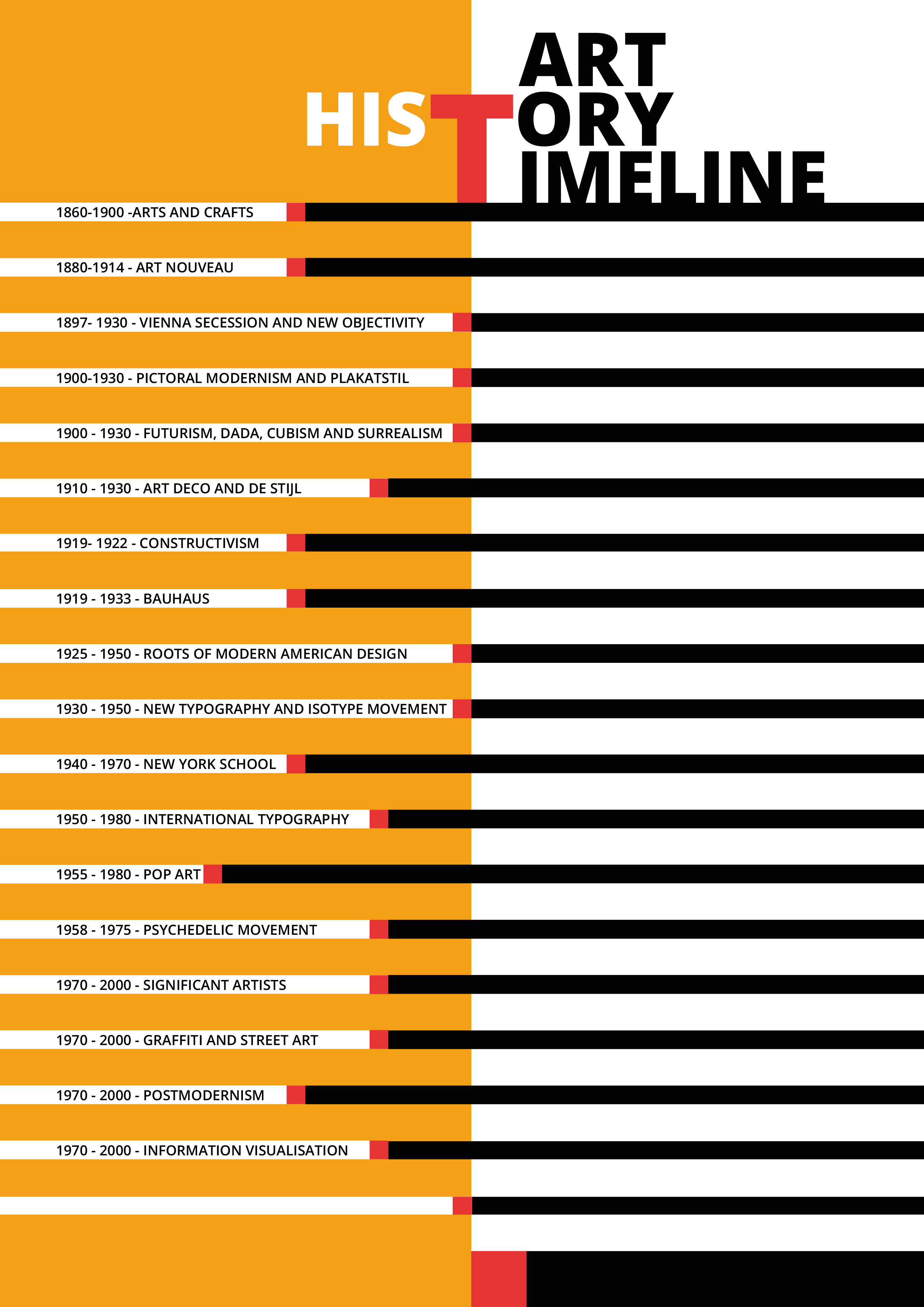 In a different perspectiv 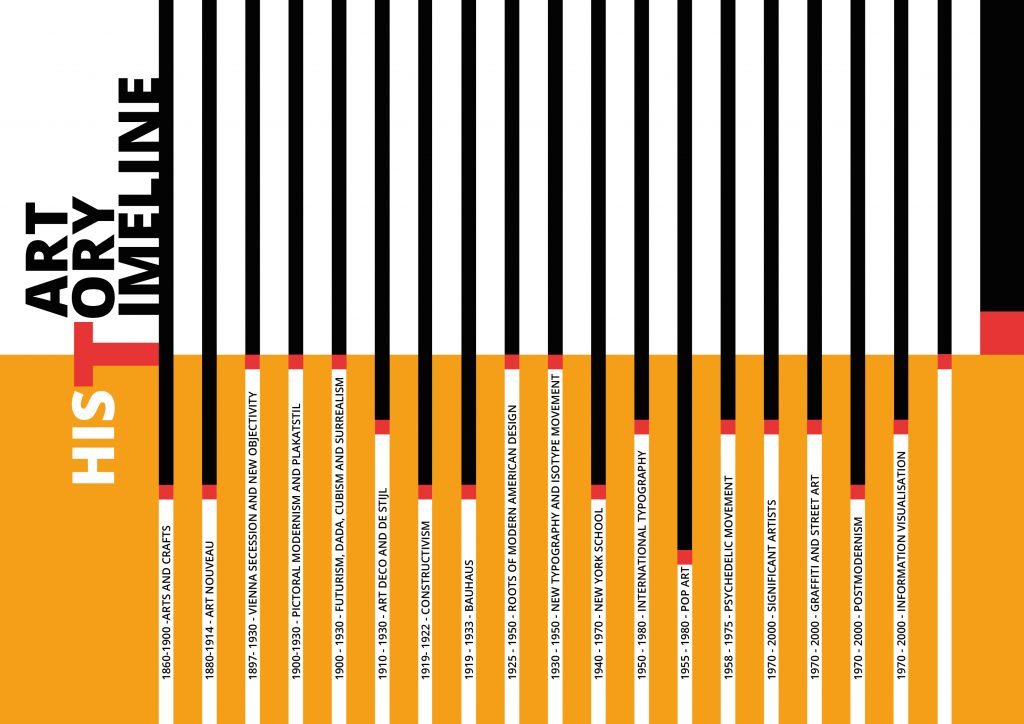 Click the image below to see my history timeline in pdf